What happens to gods when they die? The biblical account of Jesus’ death and resurrection offers one answer, but in a broader, cultural sense, we live in a secular age. What happens after the ‘death of God’ in the soul of a people? There’s an answer to this question, as it turns out, and we know because ours is not the first age to discover atheism.

Consider China, for example. Few written records survive from before 700 BC, but we know from material remains that the peasant farmers and feudal lords of this period offered frequent prayers and ritual sacrifices to the gods of nature and to their own ancestors. Shamans and shamanesses communed directly with these divine beings, and helped others to do so as well.

Through ritual, the ancients could experience the mysterious power of their gods, and through myth they could explain their experiences to one another.

As the fiefs of China grew into rival states controlled by powerful dukes, a new class of literate administrators arose who recorded their own view of the divine. The most important for later Chinese thinking was Kong Fuzi (551—479 BC), known to the West as Confucius. He rationalized tales of the gods and their struggles as colourful accounts of ancient flesh-and-blood rulers.

To Confucius, myths were valuable because of the ethical lessons they imparted, and ritual was important for its role in social cohesion.

‘Sacrifice to the gods as if the gods were present,’ he told his disciples, but his own attitude toward the actual existence of divine beings seems to have been ambiguous, perhaps even ambivalent.

Centuries later, when the warring states had for the first time been forged into a single Chinese empire, a scholar named Wang Chong (27—c. 100 AD) took that logic even further. In his view, the world could be explained without reference to divine creators or the nonsense of shamanistic ritual, as a spontaneous unfolding of material causes and effects.

Wang Chong recorded myths mainly for the purpose of attacking and debunking them. There were no gods, no form of life after death, and no reason to fear either one.

We would probably label this point of view atheist materialism if we came across it today. But Wang Chong was far from the only ancient thinker for whom the gods may as well have been dead and buried.

Indeed, he would have found a fine conversation partner in Titus Lucretius (c. 99—55 BC), a poet and philosopher of the early Roman Empire. Like Wang Chong, Lucretius denied the continuation of the soul after death. As he saw it, the world was composed of an arbitrary, swirling mass of atoms and void, nothing more. (Atoms had been theorized centuries earlier, in Greece).

The gods might exist, Lucretius reasoned, but if so, they dwelt somewhere beyond the confines of the world, with no concern for human striving and suffering. Thus it was foolish to worship them or to fear their wrath.

Lucretius’ Rome, like Wang Chong’s China, had come a long way on its journey to empire. In the dawning of Mediterranean civilization some thousand years earlier, the Greeks and Romans had prayed and sacrificed to nature gods of their own. The growth of city-states by the fifth century BC produced rationalists like Plato and Aristotle, who wrote that reason was the remedy to humanity’s ills.

By the first century BC, when Lucretius was writing, the city-state of Rome had conquered those of Greece and built a mighty Mediterranean empire. At that time there were whole schools of philosophy that taught how to live well without relying on the divine.

This, incidentally, was the world into which Jesus was born. His actions and the spread of his teachings signalled the start of something new- but we’ll get to that.

What can the examples of China and Rome tell us about how a people’s relations to the divine grow and change over time?

In their early days, most societies are closely dependent on the land. They tend to view nature as alive and the divine as immanent, that is, near at hand, and readily accessible by means of sacred ritual.

As political institutions grow more complex and writing becomes essential to public life, sacred texts gain greater authority than religious experience. Eventually an attempt is made to harmonize the old myths and rituals with the new rationalism, but the project never fully succeeds. Why?

The simple answer is that no single, logical system of thought seems to be able to encompass the wild irregularities reported by religious experience.

Cultures shaped by planned, bureaucratic states, in which nature has largely been brought under human control, tend to lose patience with esoteric quests for meaning. At the same time, planned, bureaucratic religious institutions tend to sour what little appetite for spirituality a society might still retain.

The pattern is easy to spot when we review the history of our own Western European culture, known for most of its existence simply as Christendom.

From the time of the medieval mystics like Francis of Assisi to the sixteenth century, enough change had occurred that a young priest named Menno Simons could spend his time drinking, playing cards, and secretly doubting whether Jesus was really, physically present in the communion bread. Menno and his contemporaries Luther and Zwingli wrestled deeply with faith and reason, and the result was a shift of emphasis in Christian discipleship from the rituals of Catholicism to the study of written Scripture.

By the nineteenth century, after three hundred years of rationalism, enlightenment, and dawning imperialism, a Lutheran pastor’s son named Friedrich Nietzsche could observe with horror that the sense of God had so vanished from Western culture that He might as well be proclaimed dead.

But if there’s one thing that can be learned from the religious histories of other cultures, it’s that gods don’t tend to stay dead.

The books of both Wang Chong and Lucretius, as it happens, were reactions against what had become a growing cultural force in their respective periods: a return to religion.

We know, for instance, that during Wang Chong’s era, Chinese shamanism had regained huge popularity. Not only that, but the teachings of Taoism were on the rise, along with the exotic and otherworldly faith of Buddhism, brought over the mountains from India.

In Lucretius’ Rome, materialist philosophy was losing ground not only to a renewed reverence for the old nature gods, but to Mithraism, Judaism, the worship of the Egyptian goddess Isis, and soon enough to a sub-sect of the Jewish faith known as Christianity, whose rituals were rumoured to involve some sort of sacred cannibalism.

If we look at the history of religions around the world, the evidence seems to indicate that atheism is a historical phase, with a consistent place and duration in a culture’s development.

In every culture that develops it far enough, the rationalist project eventually reaches its logical conclusion: a precise understanding of the limits of human knowledge, and a choice between dogmatic materialism, on the one hand, or a renewed openness to other modes of experience, on the other.

But more importantly, the rationalist project ends because large numbers of people never wanted it in the first place.

As anyone who frequents soup kitchens and rural coffeeshops is well aware, rumours of the death of God in Western culture have been greatly exaggerated. In fact, atheism in any age is largely driven by the urban, literate, and moderately wealthy minority who shape and record the written record of a given society.

Ritual, myth, and unspeakable religious experience continue throughout the age of atheism, held in keeping by the poor and the meek. 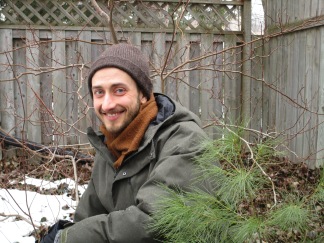 Dylan Siebert studies history in Kitchener, Ontario. He can be reached for comments, corrections, or conversation at desiebert@gmail.com.

Pastors in Exile (PiE) is an Anabaptist-rooted movement that is passionate about connecting young people in Waterloo Region with vibrant faith experiences outside and inside of church walls.

PiE is a community of people living within the traditional territory of the Attawandaron (Neutral), Anishinaabe, and Haudenosaunee peoples.

Join us tonight from 8 to 9 PM for this time to sing together. Find the Zoom link on our Facebook page or send a DM.
You are all invited to join the PiE community for this intergenerational time of song, scripture and reflection. 6:45 AM on Zoom. Find the link on PiE’s Facebook page or send a DM.
Our Good Friday Rock Walk is happening now. In a word, what grief do you carry? Put your word in a comment or a DM and we will write it on a rock and set it at the base of the cross. Or put on a mask and bring a rock to the island at Victoria Park between 3 and 5pm. Greet Pamela and Jessie at a distance and lay your rock at the foot of the cross.
Another powerful image from @mollyccostello. “My God, my God, why have you forsaken me? Why are you so far away, so far from saving me, so far from the words of my groaning? I cry all day, My God, but you never answer; I call all night long, and sleep deserts me. But you, Holy One- you sit enthroned on the praises of Israel. Our ancestors put their trust in you; they trusted and you rescued them; they cried to you and were saved; they trusted you and were never disappointed.”